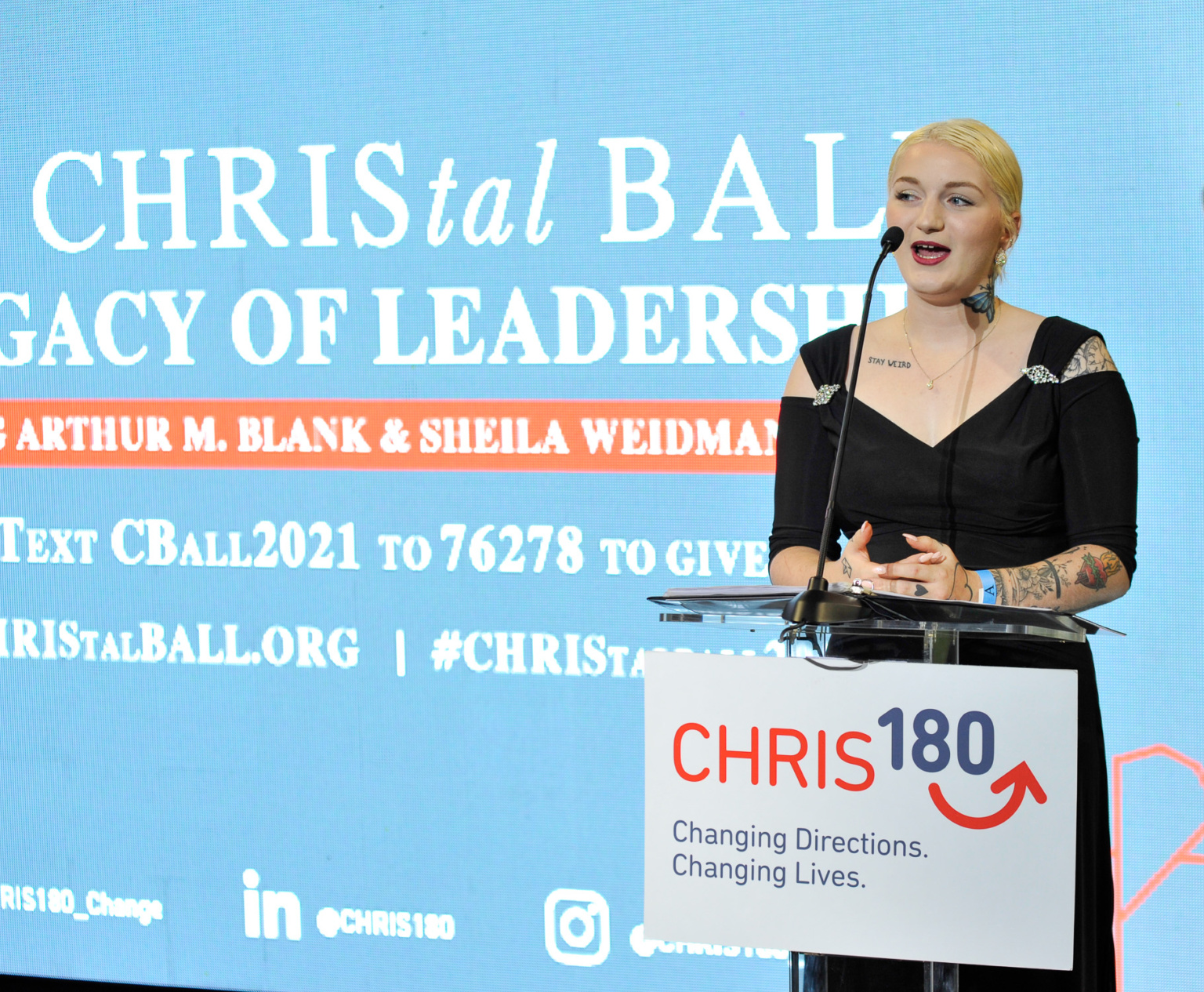 Posted at 17:40h in All Blog Posts, Resilience by Chaundra Luckett 0 Comments

Without the support of her parents, CHRIS 180 client Sabrina was facing homelessness at age 18. She was connected to  CHRIS 180 where she found the stability, acceptance, and resources that could help her make 180-degree change in her life. Sabrina originally shared the story below at The 2021 CHRIStal Ball.

“My story starts in Savannah, Georgia, where I grew up. My parents were invested in being a family that conformed to Savannah’s norms. The southern equivalent of the American Dream of a white picket fence – whatever that may be.  As a teenager, I began acting out. I was doing drugs, struggling with maintaining relationships with my friends and family and having trouble in school.

My parents called me inappropriate names when I dated boys…and, because they had a hunch that I was gay (which was true), they also called me horrible slurs that crushed my spirit.  I couldn’t win either way. I was a disappointment because I was unwilling to fit into their perfect family portrait.  And our clashes got worse. My parents began sending me away to inpatient treatment and mental health facilities.

During this time, I was manipulated, abused, and set up by my parents. They knew how to push all the all the right buttons to upset me and bring out the worst in me.  My mother would record me and send it to doctors to try and get me “locked away.”  This was because I wasn’t like her and again didn’t conform to the image she had for me.

In May 2017, I graduated from high school; and although I missed the first two months of the school year, I was proud to do it on my own. During this time, I also won the Georgia Young Authors competition.

About a year later, I was about to come out of a facility, and I was sent to Metro Atlanta. My parents told me that I couldn’t come back home. My insurance was cut off, and as an 18-year-old I was too old to go into the foster care system. I literally had nowhere to go and no one who wanted me, no family to take me in.

I knew that this moment—this transition—would dictate the rest of my life.

If I went out on the streets, who knows where I would be today. Thankfully, someone at the facility knew my situation and knew about CHRIS 180. She made arrangements for me to move into Summit Trail Apartments, CHRIS 180’s permanent supportive housing program for young adults. It was the perfect solution– my parents didn’t want me, and I wasn’t prepared to be self-sufficient because I didn’t have any legal documentation. I knew this was my chance to figure it out.  So, I scheduled an appointment to go see Summit Trail Apartments and two weeks after that I ended up moving in to my first place.

Immediately I felt the CHRIS 180 community support me in ways my family and certain facilities had not. I got a key to my apartment – that in and of itself was a big milestone. I had a place of my own. And I was given money to go get groceries, healthy ones, so that I could keep my type 1 diabetes in check.

Shortly after I got settled in and was no longer worried about not having a roof over my head, CHRIS 180 began to help me in other ways.  I was paired with a life coach, and she helped me get all my legal documents for me to work and start paying rent and daily necessities. Getting those documents also helped me to purchase my medications and apply for college.

Even with all the support and therapy, progress for me was slow. It takes a long time to undo the kind of trauma that I experienced growing up. I was still a victim of abuse who had a lot of healing to do. And, as an 18-year-old, I was given just enough freedom to find ways to get in trouble and find drugs.

Because of the drugs, I wasn’t sleeping, and my blood sugar was all over the place. I was losing weight fast.  I knew that I needed help…I also knew that I could ask for it because the team at CHRIS 180 was not going to throw me out on the streets like my parents. I also knew they wouldn’t tolerate drug use, so I had to clean up. And I did. That was my turning point. Trauma was not going to get the best of me.

I was also chosen by the Drop-In Center and CHRIS  180 to become a certified peer specialist. I got certified to help people who have faced challenges, like I have. Sometimes kids find it difficult or scary to talk to a grown up rather than someone their own age.

Fast forward three years and I’m still living at Summit Trail Apartments and utilizing all the support offered through CHRIS 180. I am also currently in college to become a medical assistant and I am now married to Tyanna, the love of my life.

Without CHRIS 180 I would have been on the streets or worse – in jail or dead. Transitional housing is genius. Some of us need extra support and direction to get our feet under us as we launch into the world.

From a troubled youth who couldn’t live up to my parent’s unrealistic expectations, I have become a healthy woman living and thriving in a judgement-free zone with people who celebrate who I am. “

We are so proud of all that Sabrina has accomplished and thankful to have her as part of the CHRIS 180 family. Thanks to supporters like you, CHRIS 180 can provide young adults like Sabrina with extra support and services on their journey, meeting them at their level of need.

Sorry, the comment form is closed at this time.